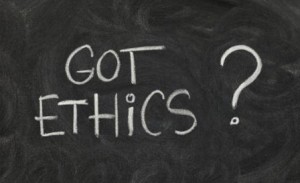 Are You Hiring Ethical Employees? When discussing interview techniques I often get asked, what’s the difference between assumptive and behavioral interviewing.  Most interviewers use the behavioral based interview style. When looking to assess a persons integrity, their background and overall character, I recommend using more of an assumptive based interview approach to get closer to the truth.

Behavioral interviews are based on the premise that a person’s past performance on the job is the best predictor of future performance. When a company uses behavioral interviewing they want to know how you act and react in certain circumstances. They also want you to give specific “real life” examples of how you behaved in situations relating to the questions. Examples of a behavior based question would be:

Behavioral based questions (non-threatening) allow a hiring manager to assess if the candidate has the skill sets necessary to perform the job and will fit into the company’s culture.  Whereas this style of questioning is very beneficial in the hiring process, it has limitations.  Behavioral based interviews alone will not uncover if a candidate has a questionable background with regards to integrity, work performance or business ethics.  More times than not, these issues do not surface until after the individual has been employed for some time. Hopefully these issues have been identified before the employee commits theft or fraud from the organization.

When assessing integrity and business ethics, asking questions that are “assumptive” in nature (threatening) will allow to interviewer to assess a candidates truthfulness. Assumptive questions are meant to invoke a certain level of stress for those candidates who have something to hide or are not being honest. Prior to asking assumptive questions, it is important for the interviewer to determine the candidate’s baseline body language. Baseline is the normal behavior a person will have when responding to questions that they do not feel would be threatening to them.  This is generally done at the beginning of the interview when you are building rapport and getting the candidate relaxed.

When asking an assumptive question, a dishonest person will display some level of verbal or non-verbal behavior (ie: repeating the question, changing position in the chair, breaking eye contact, change in complexion, etc) that is outside of their normal baseline. It is important that the interviewer pay attention to these changes in behavior. This allows them to ask follow up questions to gain greater insight and information. An example of an assumptive based question would be:

By asking “when was the last time you were terminated from a job” this implies that the candidate has been terminated at some point during their work history.  A truthful person will immediately respond “never” or “I haven’t”.

“How many times have I been terminated from a job? No, never”
or
“I have never taken money from a company”

In the first response, the candidate repeated the question back.  If this is not their normal baseline which has been consistent throughout the interview, then the candidate is stalling for time to determine how they want to answer the question.  Usually they are having an internal dialogue with themselves as to whether they want to be truthful or lie.

In the second response, the candidate stated they have not taken “money” but left out merchandise. That would tell me that they have probably taken merchandise or some point in their work history.  A follow up question could be:

“That’s great John that you haven’t taken money.  When was the last time you took merchandise from a company?  Was it more than $5,000?

Response: “no not that much”

The interviewer’s response should be: “great, I didn’t think so, so how much was     it?”

Asking assumptive based questions regarding integrity and work ethic allow the interviewer to uncover information they might not otherwise obtain from a behavioral based interview alone.  Hiring ethical candidates is equally, if not more important, as hiring for skill set and fit.

For information about assumptive based interviewing, our “Integrity Interview” or interview training, contact us at 636-346-9273 or visit our website at www.arastl.com